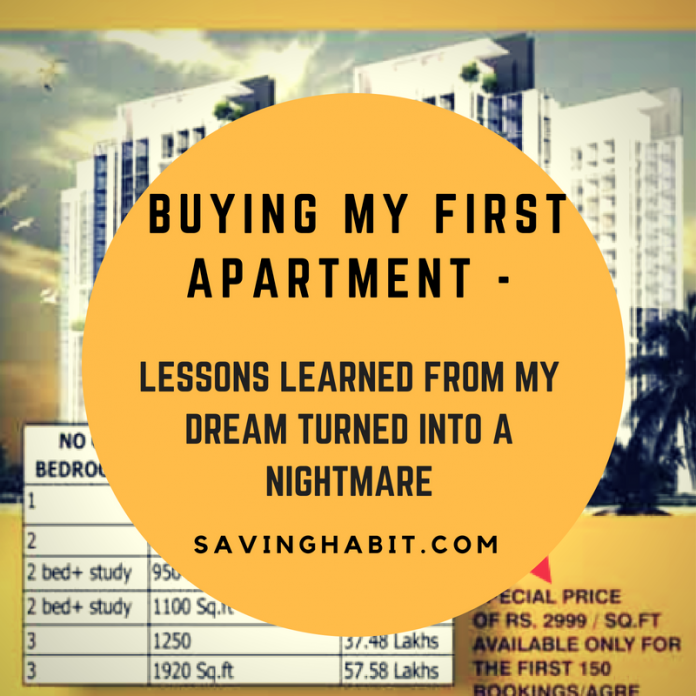 Read on for the full journey of my apartment purchase that I narrate with great hilarity whenever friends ask me about it. The tragedy is that the story involves so much waste of money that could have instead made us financially independent by now. I suspect there are a lot of people out there with even worse scenarios than mine so I hope young people reading this don’t repeat our mistakes.

YEAR 2008: Shortlisting the apartment to buy

So off we went in year 2008 on one of my visits to India to scout apartments in the “IT corridor” because we had heard in the news that those were the “up & coming places”. We quickly realised that it made more sense to look for an apartment in the same neighbourhood where my parents had rented for 20+ years since we knew it intimately. The only problem was that all the completed apartments in that neighbourhood were very expensive . We managed to find one affordable place in the vicinity. The reason it was cheap was because it was a barren plot of land on which no apartments had been built yet! There was only a model flat and a sales fellow handing out brochures with “computer-generated graphics” of the apartments to be completed only by year 2012, four years from the launch date. See below. 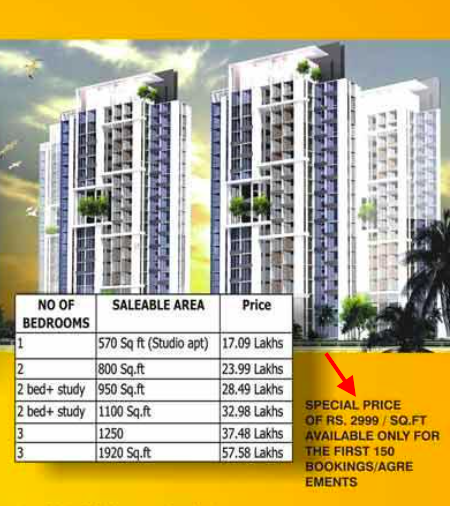 The price was too good to pass up. So I booked a 2BHK flat using my savings to pay 25%  mandatory down-payment to sign the construction agreement. I then applied for a home loan for the remaining amount from a leading bank that had tied up with the builder.  We took a lawyer along with us to review the construction agreement to make sure the land was in the builder’s name. Problematically the builder expected to get approval from the housing development authority only in August 2009 meaning they sold apartments without getting the approval to build! But the price and location made us overlook such red flags. I returned to the U.S not realising that the builder was about to take us on a roller-coaster ride for the next 10 years.  I was 27 years old at that time.

The first sign of trouble came in mid-2009 when the builder unilaterally increased the floor plan size of all the flats and gave an ultimatum to all  buyers who had already signed the agreement : Either pay extra lakhs to keep the same flat or downgrade to a smaller flat or get a refund of the booking amount. We decided to pay the extra lakhs needed since it was all going to paid via loan anyway(!!) and kept the same flat unit as the extra space seemed like a blessing in disguise.

The next update we received from the builder was around August 2009 saying that the building plans had been submitted to the housing development authority and approvals were expected by year-end. This was a shock to us because the builder had earlier told us earlier that approvals will be in hand by now. We could now see the connection between the builder increasing the floor plan size earlier in the year. It looked like they had waited to submit the “expanded” plan for approval.  This meant that the builder would not be able to lay a single brick until the approvals came through from the city.

Year 2010 rolled by and we heard nothing back from the builder. Out of the blue in early-2010 the builder called for an owner’s meeting to update them on the status. My parents were excited to go to the meeting as they felt it must have something to do with the city approving the project plan and the project finally moving forward.

I was sound asleep when my mother called from India and woke me up. She was crying and I was scared because I’d told my parents to wake me up only in an emergency. Turns out that the builder called the meeting to discuss whether or not we wanted a swimming pool among other such trivia.  A group of frustrated buyers called the police & T.V stations and got the builder’s executives arrested for zero progress after 1.5 years of booking the apartment. Now my mother was worried that our  booking amount worth Rs.10 lakhs was going to be forfeited now that the builder’s people were jailed. Whew! Thank God. This was not an emergency! I reassured my mother that I’ll make back the money even if it was lost forever and that I was glad it was not their savings at stake and went back to sleep 🙂 The fact I had nightmares in my sleep is a different story 😉

The builder emailed us later vehemently denying allegations against them saying the approvals were delayed due to unforeseen reasons. But by now it was clear that the builder did not respect the buyers very much and would continue to take unilateral decisions tilted in their favour. Approval from the city came in August 2010 a full year beyond what the builder had communicated to us. The foundation was completed only in mid- 2011. So definitely the apartment was not going to be ready by the promised move-in date of 2012 🙂

YEAR 2015: Finally got Possession of my flat

My builder finally handed over the apartment in mid-2015, three years past the promised delivery date and 7 years since we first booked the apartment. By this time I had returned to India permanently, was married and living in Goa. I spent extra money to do up the interiors so I could rent it out instead.

After spending all that money on interiors,  I was forced to give it out on a very low rent because other owners who had gotten possession at the same time were also competitively renting out their units  depressing the rental value.

I consoled myself that at-least the builder was selling the remaining apartments at Rs.8500/sq.ft in mid-2015 making me a crorepati on paper for a brief period.

Year 2015- till Present: Multiple events cause a real estate crash

The nice feeling ended just a few months later when a natural disaster in the city caused prices of real-estate to collapse overnight. Fortunately our apartment complex was not affected physically but its value dropped as a result of the real-estate market crash.

Later with demonetisation & RERA,  the current going rate of the apartment as determined by the market and not the builder is now stuck at Rs.4500/sq.ft

1. Don’t buy a house when you are young. Focus on your career instead:

2. Renting is a better option until you are old enough to settle in one place for good:

3. Save up the entire amount to buy a house instead of home loan EMI:

4. Buy only a “ready to move-in” apartment that is atleast 3 years old:

5. Live as a tenant in the neighbourhood or apartment complex before buying there:

6. Your expenses don’t end with just buying a house:

7. Buyers should always be skeptical of Builders:

The silver-lining in all of this was that I did not use the home loan I applied for since there was no apartment being built on the ground!  Instead I was setting aside a large portion of my salary each month in anticipation of the payment requests from the builder. As you can imagine I managed to save up nearly the entire amount while waiting for the builder to finish building. This was the second best thing to happen to us: that we did not pay loan EMI. Only problem was I kept all this money in my savings account in the hope that the builder will ask for the money any time. It was stupid of me to not even invest it in F.Ds that can be broken any time. That was a lot of earning potential wasted due to lack of awareness and foolishly expecting the builder to stick to their promised timeline.

What is your story?

How much money I need to Retire Early In India

The basics of Financial Independence and Retiring Early (F.I.R.E)

Top 5 Reasons to be Financially Independent and Retire Early (F.I.R.E)