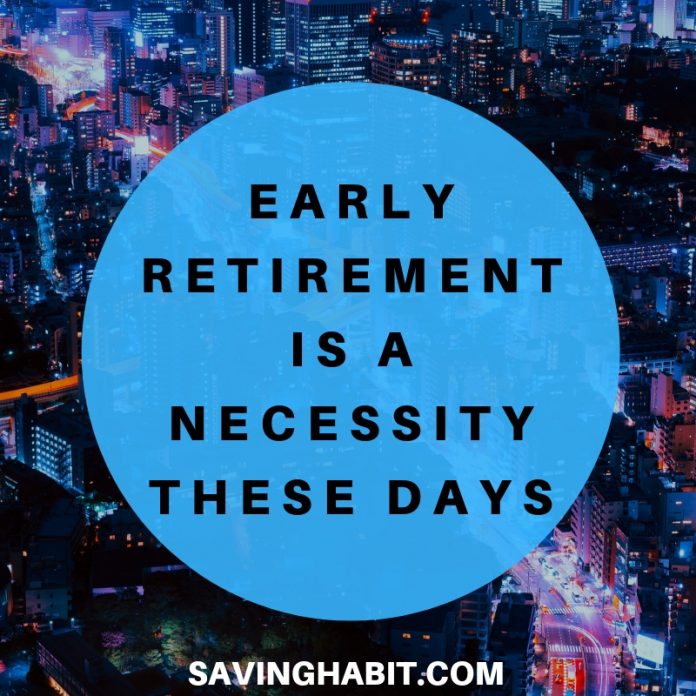 Real-life case study: Headline news about all the 45-year old mid-level managers at TCS/Cognizant/Infosys getting laid off because their industry considers them obsolete and who probably won’t get another job at the same salary for at least another 3-4 years. An emergency fund of just 6-months to 1 year will not help in this case. These folks have been forced to take early retirement.

I’m a practitioner of early retirement. But after 5 years on the path, I have realized some important lessons. The typical dream/misconception of early retirement is to “sit and eat” from the retirement fund alone from age 40 to age 90 which is a span of 50 years. it is hard to pull off as life throws too many curveballs. It is possible if key variables work in your favour.. definitely not a myth as there are real-life success stories 🙂

My Alternative solution for Indian conditions

It is a process, break it into stages

Once you finish saving up for retirement as early as possible, guess what: you don’t have to put aside those monthly SIPs anymore. That means you can work for a lesser salary at jobs that are more fulfilling and less stressful but fully pays for your monthly expenses supporting kids & elderly parents. most people who want to retire early simply are tired of the job stress and deep down are not averse to working if there is work-life balance.

Use your Retirement Fund If the situation arises

If you ever lose your job before your old age like the TCS/Cognizant/Infosys mid-lifers: you can use a small portion of your retirement fund to fund monthly expenses for even 3-4 years while you re-skill and find another job after which you can replenish the amount you took out during the jobless period.

MMM quotes to support the Middle path to Early Retirement

Even Mr.MoneyMustache who I look up to, earns money that covers his expenses meaning he has not touched his retirement fund yet and actually advocates earning while “retired”:

MMM: Since year 10, several more years have passed, and because the rental house pays all bills and we still do some work on the side when the boy is in school, the investment gains and income have just been building on themselves. We also paid off the mortgage on the primary house.

And in the comments section MMM repeats:

MMM: Although I will never lose my love for an efficient and simple lifestyle, I’ve actually got a secret plan to get quite a bit richer over the next 40 years. It’s secret, because I don’t want this blog to become one of those Big Income Big Spender (BIBS) blogs that everyone else writes. But it’s not complicated – the trick is simply that I’ve been maintaining a positive savings rate, even in retirement.

Top 5 Reasons to be Financially Independent and Retire Early

I want to quit my job and start my own business

Are you prepared for a layoff?

We have Updated Early Retirement Calculator/s – Go check it out

The posts on Saving Habit.com are purely the author’s personal opinion. The author is NOT a certified financial planner.
%d bloggers like this: