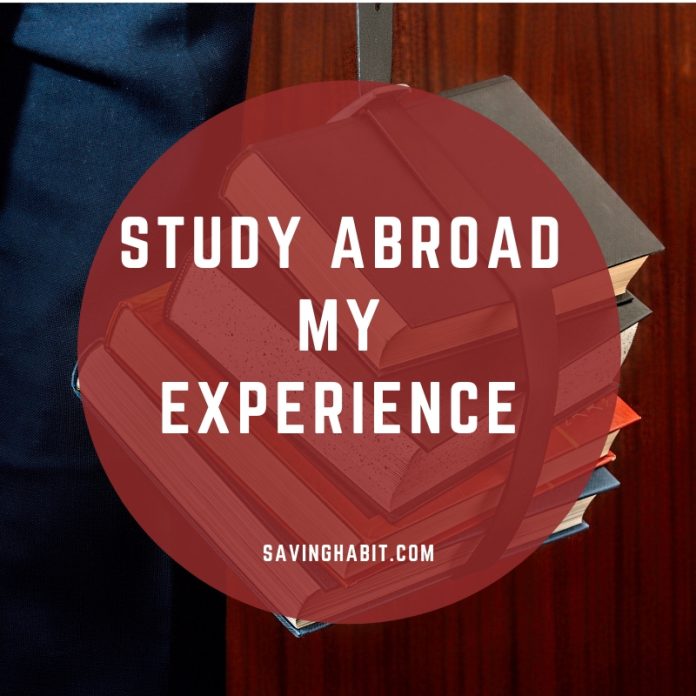 When I started studying Engineering, I had no plans of doing a Masters degree abroad. But my engineering college was filled with students whose goal was to go to the U.S. So much so that students were studying for GRE & TOEFL right from their first year! This was the general atmosphere everywhere at that time – IITs, BITS, REC/NIT etc. I was caught up in the same excitement and decided to study abroad for my Masters. But the whole journey of getting there was not so straightforward- it had it’s own drama. College study abroad or in India is the biggest expense for young people entering the work force and second biggest expense after buying house for parents with kids. if not managed well it can derail your retirement plans like it did for my parents.

I read this on Subramoney the other day “How much should you spend on your children’s education? Suppose you have estimated that you need Rs. 6 crores for your RETIREMENT. You are now 53 years of age. You have about Rs. 2 crores and 6 years of working (and you also expect your Rs. 2 crores to double in this period), so you think you are comfortable. However, suddenly your kid tells you he/she has got admission in a European college – it costs Rs. 90L for the education. Your second kid is also watching.”

This hit home- because my Masters study abroad had derailed my parents’ retirement. In-fact such last-minute expectations from children can derail anyone’s retirement plans. In this blog post I will share my story and learnings so you can plan ahead.

This blog post is about a Masters Engineering degree in the U.S but it can also easily apply to MBA in India or other second degrees outside India.

To know our plans to fund our kids graduation read this blog post .

Going to study abroad is a phenomenon most unique to South-Asian countries. Because higher education in these countries is either extremely competitive or low-quality, quite a bit of students opt to study & then work abroad.

Dollar Salary is a big attraction for getting a foreign degree apart from the opportunity to get a high-quality education or do cutting-edge research. The dollar-rupee exchange rate today is Rs.70 to 1$.

As long as this exchange rate holds true in the future, your retirement will be derailed if you or your child wants to study abroad on your dime.

I was reminded of how I told my parents that I wanted to study abroad in the US to do my Masters immediately after I finished my B.E in India. My father had retired from his bank job a few years earlier. Their plan was that once I got a job in the city they would move back to their native place where they owned a house and costs were much lower.

After completing my B.E in India, I was sitting at home unemployed- there was no campus recruitment in my college because of the dot-com bust. Meanwhile along with some friends of mine I had applied for couple of Universities in USA .

Luckily I got admitted to a state university in the U.S for a Masters degree. The next hurdle was student visa, they were getting rejected left and right post-9/11 attacks. I got lucky again and got a visa.

The next question was how to pay for the fees in U.S dollars. Studying abroad is an expensive affair, my education fees was running into lakhs of rupees. Education loan came to the rescue! but with a catch. My parents had to put up their house as collateral for the loan.

Being the kind of middle-class parents, who would sacrifice a lot for their child’s education, they also chose to pay the interest while I was studying so the loan repayment would not be burdensome for me. So for the next 5 years they had reduced monthly income due to interest payments apart from their largest asset stuck as collateral with the bank.

It was all one big unplanned mess. But one that I am grateful for and forever indebted to my Parents. Thank you Amma & Appa.

But given a second chance to study abroad I would definitely try harder for scholarships.

Other Kids Had Scholarship or other ways to pay for college

Now when I got to the U.S, I saw that kids around me had been much smarter than me. They had gotten tuition scholarships & all-expenses-paid fellowships from India itself because they were better-prepared and well-informed.

Other peers of mine took a bet and worked under a professor for a year to prove their worth and later snagging a teaching/research assistantship .

Others managed to wing an internship that was a pathway to a job at the same company. So basically I was one of the few clueless middle-class Indian kids who had no idea how to snag a scholarship and was paying full tuition cost through an education loan! yikes!

My fortunes turned around towards the end of my course as a result of some lucky breaks. But my lack of initiative as a student is not something I am proud of. All the more because it delayed my parents’ retirement for about 5 years until the education loan was paid off.

My parents are not alone when it come to putting their kids education ahead of themselves. See the statistics below

Truth about Studying Abroad based on my experience

I’m listing down a bunch of truths about studying abroad.

Quality of education in US Universities

I worked in US for 10 years after my PG. You can read more about my experience.

If Taking Loan is necessary

Read our blog post on how to pay student loan in shortest time.

A new trend I’m seeing is kids wanting to do their 4-year engineering degree itself abroad given the extreme competition and low-quality in India. In just one generation I can see kids’ expectations getting higher and higher as a result of being surrounded by aspirational peers. But this outcome is to be expected if as parents we’ve strived to send them to the “best” schools here in India.

I have no idea of how to plan for a 4-year college study abroad as it is more expensive, has fewer financial aid options and requires the kid to be more mature to handle the greater freedom in western countries. So I’ll leave it to the readers to throw light if they have experience in the matter

If you’ve studied abroad, please share your tips to get scholarships and other financial aid for Indian students.

Subscribe by E-mail for more awesome information on Early retirement, personal finance and our life in Goa!! We publish one new post every week!!! Its Free!